Manuel Contreras Vázquez (Santiago, Chile, 1977) studied composition at the Universidad Católica de Chile with Alejandro Guarello and Pablo Aranda, at the Milan Conservatory with Alessandro Solbiati and Gabriele Manca, and at the Accademia di Santa Cecilia in Rome with Ivan Fedele.

His works have been included on CDs and DVDs in Chile and Italy. His scores have been published by Suvini Zerboni (Milan), Edizioni Sconfinarte (Brescia) and BabelScores (Paris).

He has been Resident Composer at the Spanish Academy in Rome, at the Récollets Center in Paris, at the Saari Residence in Finland and at Fundación Cinenómada in Peru and Bolivia. He was a lecturer at Universities, Conservatoires and other institutions in Grenoble, La Paz, Roma, Santiago, Valparaíso and Weimar. In Chile, he has been a University teacher, developing academic projects and publications.

He has received scholarships and grants from the Alban Programme of the EU, Ernst von Siemens Musikstiftung of Germany, Ministry of Foreign Affairs of Italy, Spanish Agency for International Cooperation, SGAE Foundation of Spain, Institut Français, Kone Foundation of Helsinki, Chilean Government and American States Organization. He has received the Castiglioni Prize in Milan and the Luis Advis Prize in Coquimbo.

He lives in Vigevano, Northern Italy while he is doing a PhD at University of Huddersfield, United Kingdom, with Bryn Harrison and Aaron Cassidy. 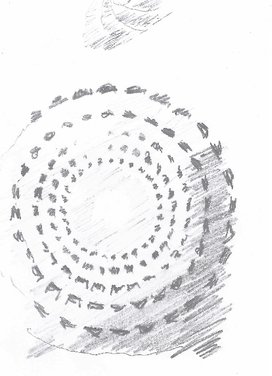 Preparatory sketches for "Misa" and "Sacaoi"